Holly mother of unexpected trips! How could I have slept on this til now?

Greek band Automaton has really up the ante with their latest full length, Talos. How so? Well, this last November they put out one of the most varied, entrancing, gripping and just plain heavy albums we’ve heard in 2018. A strong contender to get a spot in our top 15  metal albums of the year, Talos goes pretty much everywhere in its 58 minute duration. Doom, Sludge, Atmospheric, Stoner, Drone, even some moments that touch on Funeral Doom and Avant-Garde. Kinda hard to make all those things work in one go, but as I mentioned before, Automaton made it happen. 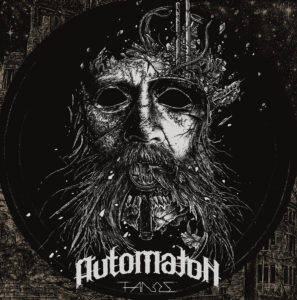 The band labels itself as Psychedelic Doom, which overall fits the album Talos pretty well, but each track is essentially a jab at a different genre. The album is essentially the musical expression of what would happen if Talos, the mythical metal giant of Crete and archetype automaton, awakens in the modern era to fight injustice and protect the innocent. It would be chaos, desperation, desolation and woe, just like this album musically portrays. Which is probably why I like it so much. We also have to give an honorable mention to the sick artwork of this album…. that’s tattoo material right there, if you find and artist good enough. And crazy enough.

Automaton were formed in 2011 in Athens, Greece, and their first full length, Echoes of Mount Ida, came out in 2013. Talos, the follow up, hit the musical streets mid-November this year via Sound Effect Records, to the delight of metal heads everywhere. Recorded at Electric Zen Studios Athens last year, it was produced by Automaton and Mike Kavvadias. Engineered and mixed by George Leodis, it was mastered by Brad Boatwright at Audiosiege Studio. Talos was released in 3 limited vinyl editions, digipack CD and digital, so I’m going to leave the link to buy these things here, in case your holiday shopping takes you into the musical realm.

Enough with the chatter! Turn up the volume and listen to Automaton’s Talos with me!