BOY HARSHER releases CAREFUL – Comparing the old with the new!

To be clear and honest, this is not a review per se.  It’s more along the lines of a celebration of awesome music in our ears.

Boy Harsher have come a long, long way since the first time that we at Too Much Love first saw them perform. That time they were playing in a tiny, empty art gallery, on the floor, with two powered speakers as the house sound system. The duo not only put on an amazing performance, but they also were super kind and greatly appreciative when we practically demanded a copy of Yr Body Is Nothing on vinyl, cash in hand. Fast forward to the last time we saw them, opening for The Soft Moon, just a couple of years later, and things have not as much changed but gotten bigger and better.

We had already made up our minds after that first show that Boy Harsher was an insanely good electronic music act. The Lesser Man album was played in our office countless times, and our dear founder Flor Frances has spun its tracks in many a Dj set. The duo’s discography is solid in its entirety, and their sound style varies a little but each release, sometimes darker, sometimes dancier, sometimes mesmerizing.  And considering the attention, fame, and success that they’ve been getting with their latest releases, quite a few people share our opinion!

Which leads us right to their latest release, Careful. To say there was much anticipation for the album is… not enough. It seemed that half of the USA’s music journalists were waiting to pounce on the new music. After a couple of singles were released, the album streamed exclusively in NPR before its release. It’s a sign that Boy Harsher has really grabbed the attention of the world now. So it is kind of fitting that Careful is a pretty dark and creepy album in some parts. The intro and outro are especially dark and addictive.

Boy Harsher’s sound has cleaned up somewhat in Careful. We noticed less purely electronic bass lines, more synthwave, more space in between the notes. The result is a dreamy, dark, mysterious sound. It is not as heavy as the Lesser Man or Yr Body Is Nothing albums, taking more the line of their previous EP Country Girl, which is more melodic. But rest assured, all of you haven’t listened to the new album 200 times already, the Boy Harsher signature sound of haunting lyrics and danceable music is still very much there. It just dressed up elegantly for the night.

While most of the album is composed of danceable tracks with Jae’s dream voice floating over the music, there are a few tracks that are…different. Interludes, suspenseful sounds, whispered voices. Frantic tones blend with weird, ominous synth sounds. Take the outro of the album, for example. This is straight out of a nightmare.

Overall, Careful is Boy Harsher’s most “playable in public” album (not that many of us care about that). It also might be labeled as the best to introduce new fans too, especially possible listeners that are used to more happy sounding music.
And, happily enough, the chance to do that might be soon as Boy Harsher is currently on tour, throughout all the US, Mexico, Canada, Europe… you name it. The tour for Careful is extensive. the flyer with the dates is below. Our recommendation is that if you wanna go, you get your tickets ASAP. These shows tend to sell out.
Now, let’s blast this track and hope to see Boy Harsher live soon! 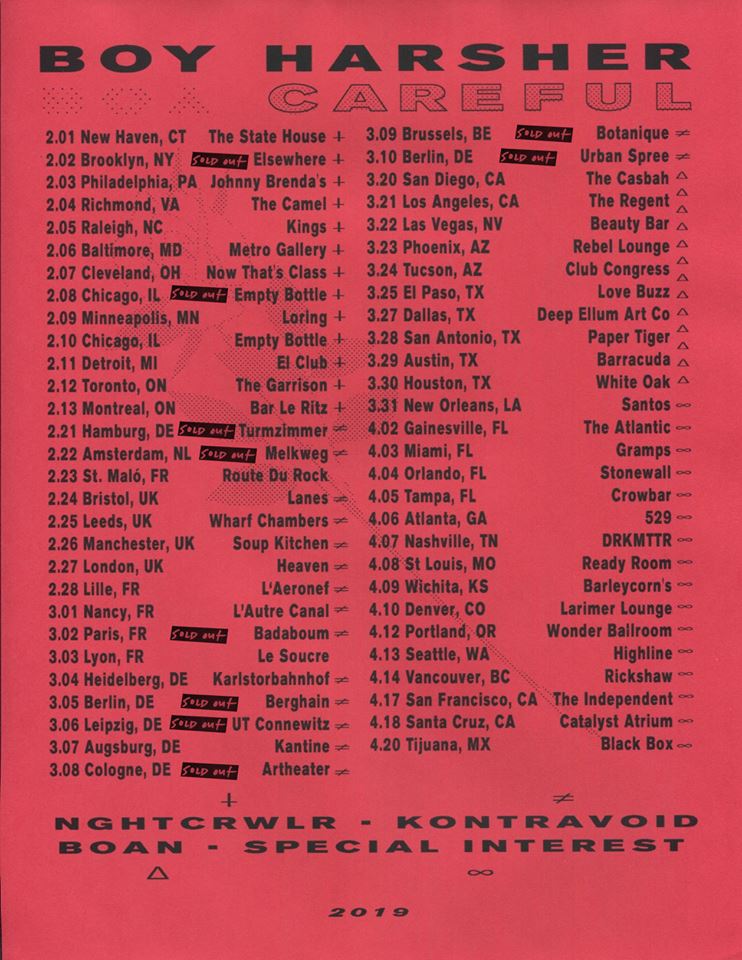