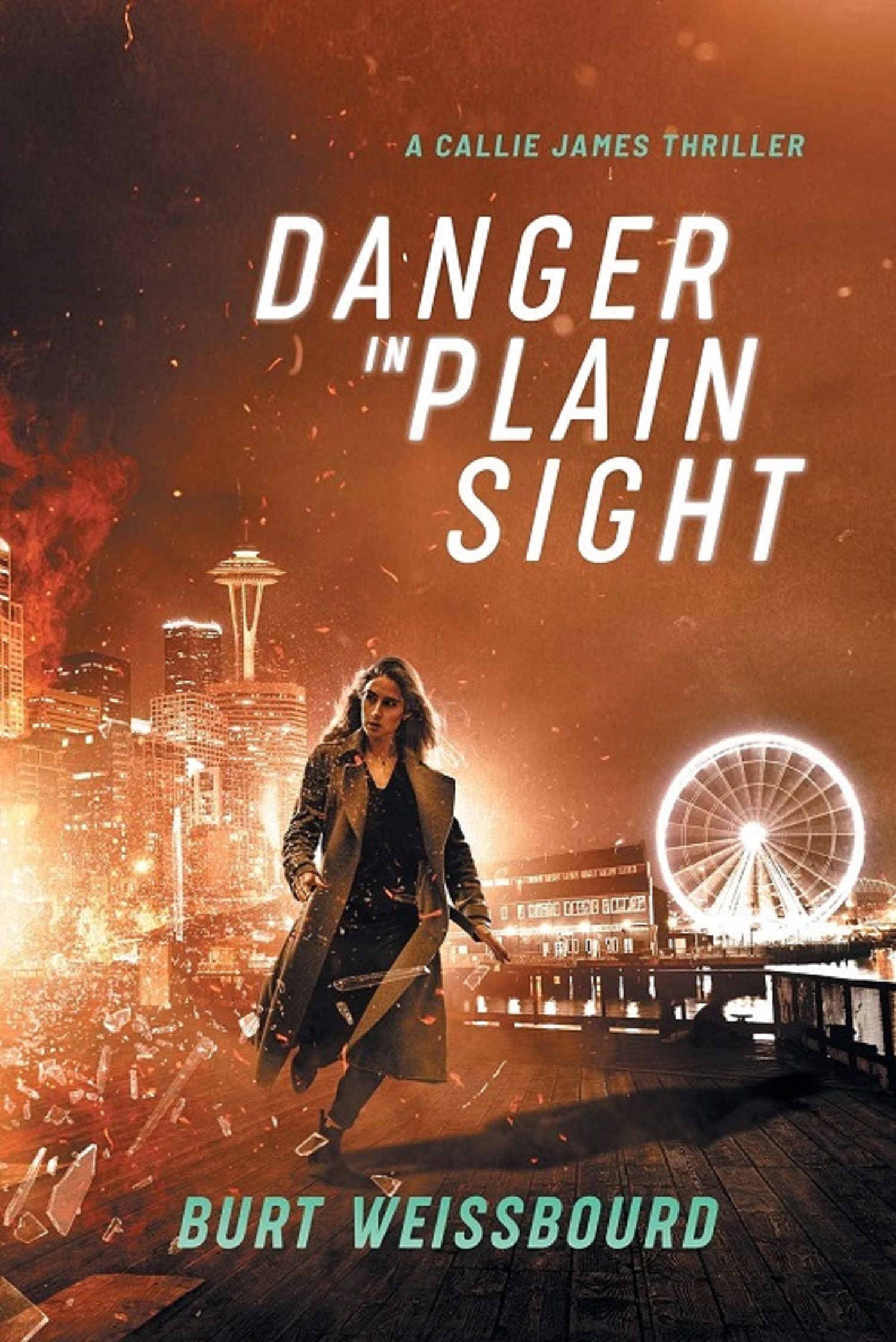 The novel Danger in Plain Sight marks the debut of Burt Weissbourd’s new series character, Seattle restaurant owner Callie James. Weissbourd succeeds in creating a three-dimensional and believable main character with James and a number of the novel’s secondary characters, particularly Cash, emerge from these pages fully formed and satisfying. Suspense obviously plays an enormous role in making this thriller work, but Weissbourd writes about people primarily and creates a vivid assortment of characters whose actions and reactions push Danger in Plain Sight towards its inevitable conclusion.

The filmic qualities of the book are not surprising. Weissbourd, before turning his hand to novel writing, developed screenplays associated with many Hollywood A-listers including Al Pacino, Robert Redford, and Sally Field, among others. He helmed his own production company from 1979 through 1986 and produced two particularly notable films, a movie adaptation of Peter Straub’s classic horror novel Ghost Story and Raggedy Man starring Sam Shepard and Sissy Spacek. He moved out of active involvement in the movie world after closing his production company and built an investment company from the ground up, but the skills guiding him in that former life are still in abundance.

The plot is thoroughly modern and believable. Many writers who excel at characterization, as Weissbourd does, are often poor plotters, but that isn’t the case with Weissbourd. The novel’s inciting incident involving James’ ex being struck by a car in a murder attempt is the first taste readers have of his capacity for describing action and doesn’t disappoint. Further action scenes laden throughout the narrative only underline his skill depicting physicality. Weissbourd never romanticizes such moments and portrays them in unflinching fashion.

The dialogue is believable, reveals character, and advances the action. James’ motivations driving her to aid her ex and father of her son will strike some as slightly unbelievable, but there are some unstated reasons implied in the storytelling and people often assist those from their past for threadbare motivations often defying reason. The thriller and hard-boiled detective genres are, essentially, realistic modes of fiction and there’s really nothing driving the characters any adult will fail to recognize.

Danger in Plain Sight has a powerful finale that wraps everything up in an effective way. Weissbourd, likewise, does an exceptional job invoking the Seattle area for readers; as a one time resident of the region, his obvious familiarity with the city and its atmosphere serves him well throughout the course of this book. Others have pointed out before that series characters, especially in the thriller and/or hard boiled detective vein, are exponents of the regional school of fiction common in American literature. Weissbourd’s work is no exception.

This is a vigorous and imaginative debut for Burt Weissbourd’s new series character. Callie James emerges from this story fleshed out and he does a solid job of presenting characters to the readers certain to recur in future volumes. Danger in Plain Sight is an entertaining and fast paced reading experience that should bring Weissbourd considerable notice and plenty of new fans.