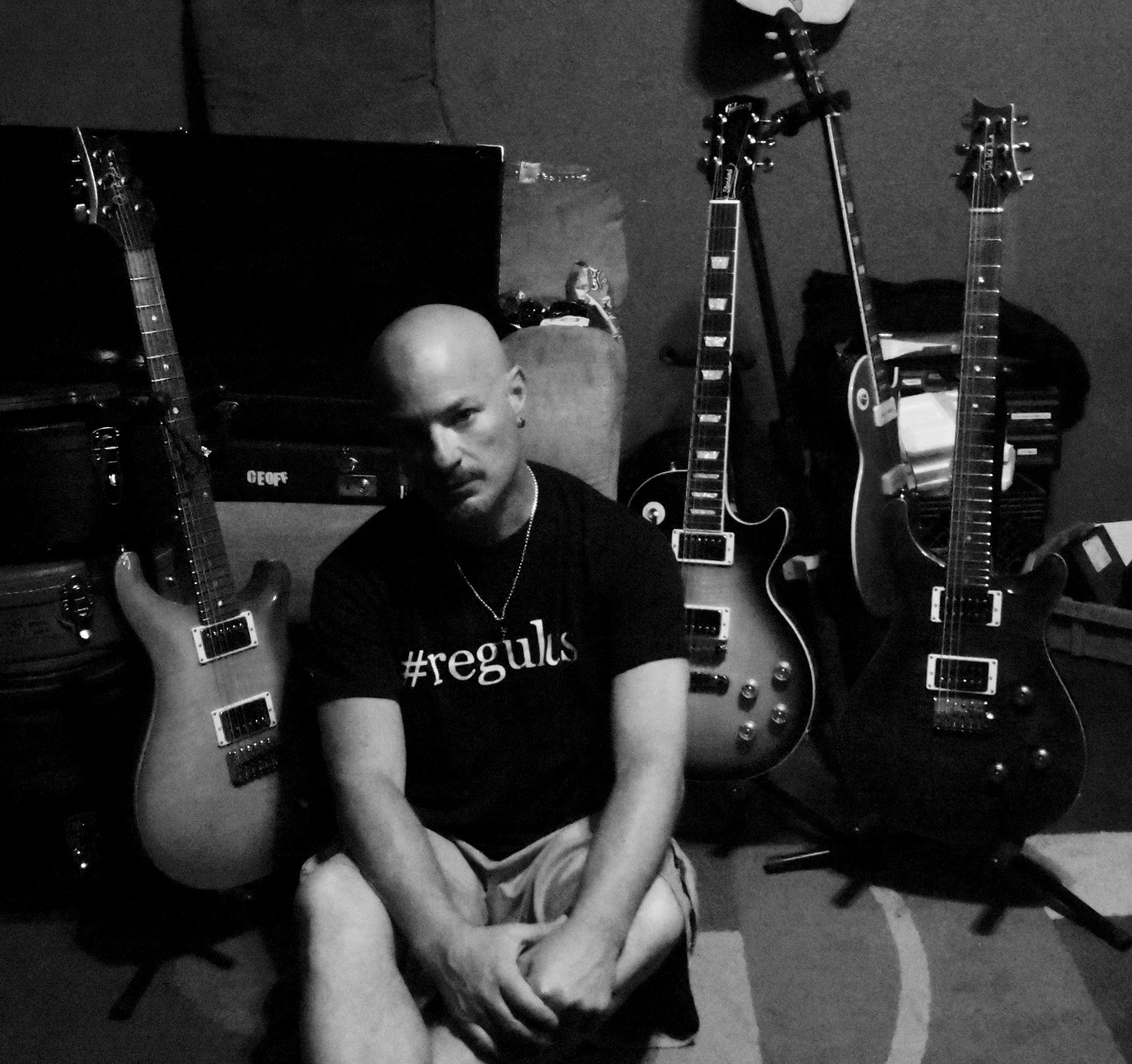 Hello Little King! You have new music you are working on – super rad! The band has been together for some time – fill us in on what this album will be like and how it will be the same or differ from others?

Hola, Tiburones Independientes!  Nice to chat with you again, and thanks so much for your support last go-round.

I’m feeling pretty damn good, so far.  We just finished the drums, bass, and about 90% of the guitars a month or so ago in El Paso.  Eddy (Garcia, drums and engineer wizard) and Manny (bass, backing vox, driver) LAID IT DOWN!  I had my work cut out for me, but the early “faders-up” mixes sound incredible.  Now that I’m writing the vocal melodies and finishing the lyrics, all I can think about it not messing it up.

I think the biggest difference between this album and any other previous Little King release (this is #7, by the way, which is crazy to think about) is that this is the first time I have kept the lineup the same from one recording to the next.  Manny and Eddy are so good, so good for my music, and push me hard into directions and levels that I wouldn’t achieve otherwise.

Because Occam’s Foil is less than a year old, we are riding the momentum and the comradery from that success and moving into the unknown feeling good about ourselves, each other, and the music.  As a result, this will be the most intricate and ACCOMPLISHED Little King album ever. I have no doubt!

2020 has had most everyone at home – a lot! Have you used creating this album as an outlet to be creative?

I had to do SOMETHING!  The world was imploding, and my dreams and goals seemed to be evaporating right along with it.  Occam was surprising in that people seem to love it and want more of it.  I never have any real expectations for my music other than to just put it out and do my best. If I feel good about it, that’s typically good enough.  But with the success of the last record, it’s like, “Okay…you better do better!”

We had some big plans to tour and tour and tour in 2020, but when Coachella cancelled, so did all of our festival and club dates.  It would have been easy to feel sorry for ourselves, but that’s not how I roll.  So, I used the time in Quarantine to write about the Quarantine!  Seems so obvious right?

The new album is called Amuse de Q – Inspired by, amused by, and terrified during the Q (quarantine).  All of the new songs reflect some universal themes that should be easily relatable for our audience…isolation, alcohol issues, social media + politics and the BLM movement, mental and physical health, domestic abuse, and more.  It’s packed with heaviness, as this is a heavy time.  I ALWAYS try to bring a little levity, too! Life is too short to be serious all the time, but these songs are weighty and I think the music is, too.  Can’t wait to share it with everyone.

We love to dream – what are you still dreaming about? One career goal you really want to happen.

I dream of playing for you, in your town, in front of you and 500 of your closest friends. We have so much to say, and Little King has so many songs from the last 3 albums that haven’t seen a stage. I am in my element playing for you, connecting with you on a visceral level that cannot be duplicated on a livestream or on an album, as much as we try.  Yeah…I dream of a time where we can hug and high five after a show and crash on your couch.

What would you say is the best song lyrically you have ever released?

My background as a Creative Writing major and English teacher are inescapable.  I work and re-work the lyrics of all of my songs to a point where I am happy with virtually every single word.  There is a method to the madness, and I am clearly obsessive about it.  I hope that our fans can tell!

There is also a song on the new album called “How Could You?” that deals with an abusive relationship.  It tells the story of hopelessness and escape, and I think it may really be the best thing I’ve done.  Will have to see how our fans feel about it, but the music is already recorded (minus a little string arrangement and a guitar solo) and it’s phenomenal. I love it!

Thank you for your time today. Will you tell fans where they can find you on IG and Facebook and keep an eye out for the new music.

Always my pleasure!  We are at www.facebook.com/littlekingtunes and www.instagram.com/littlekingtunes for all to see.  I want people to visit us at our web site, though…it’s comprehensive!  Merch, bio, music and lyrics, streaming links, press, and more.  We keep it updated, so always go there to find what you need in Little King Land.