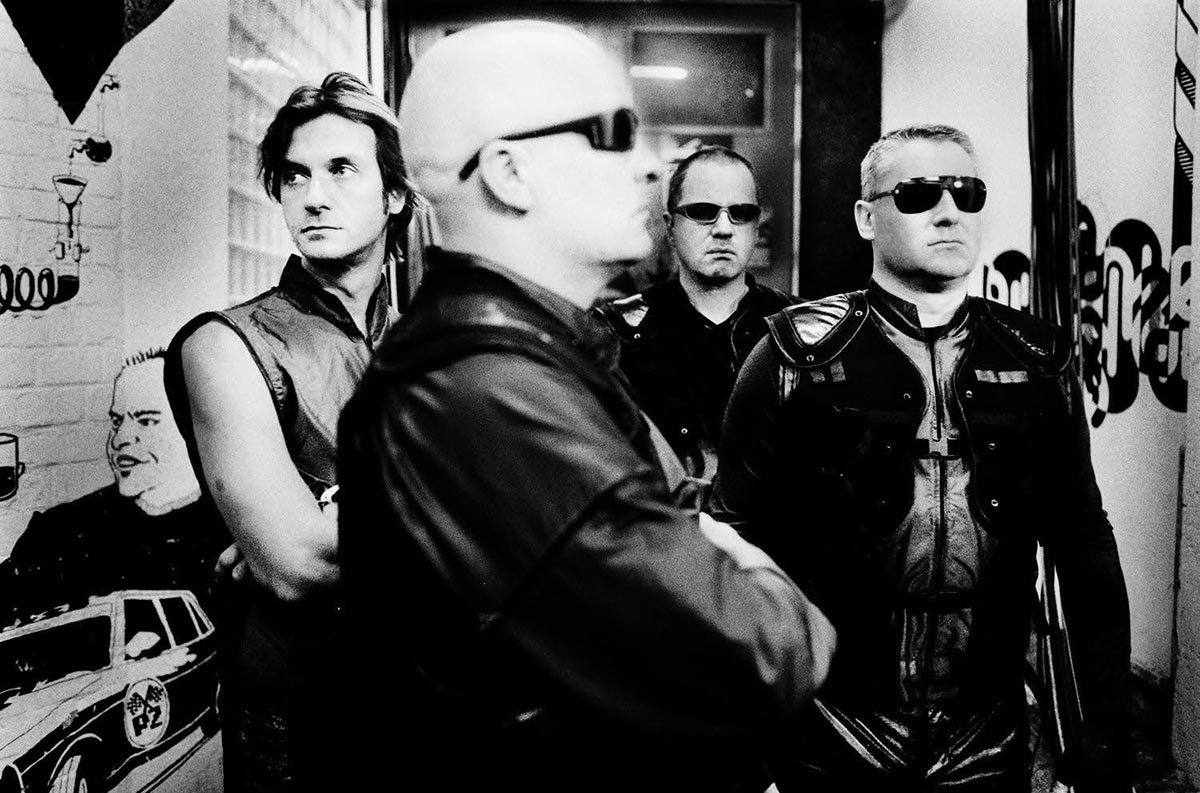 Front 242 returns to Miami to kick off what could be their last U.S. tour

Last year we had the pleasure of talking to Patrick Codenys, founding member of the emblematic EBM band from Belgium, before his DJ set at Gramps. This time he will be back in Miami with the full band to inaugurate the new venue on 11th street, The Ground, and we had a second chance of sharing some words with him while he was in Belgium preparing to hit the road.

During our conversation with Codenys we talked about how Front 242 manages to keep their sound alive after 35 years of playing together, what he misses the most while on tour, his side projects, and more.

Although Patrick didn’t confirm or denied it, there are strong rumors that this could be the last tour of the band, so if you are a fan, or if you never got the chance to see them live, you better show up tomorrow, September 21st, at The Ground!

Front 242 has been active for 35 years now. How do you manage to keep your shows an your sets fresh and interesting?

Most of the tracks we have are based on sounds more than on notes, so the composition is not always that important. What is important is how we manage the sounds within the song. So what we do is that we always renew the sounds, we still are very much up to date with the technology, and we try to bring in modern sounds. Sometimes we have to go into our catalog of songs, and we pick the ones that are more modern sounding. We also do this with video clips. For this tour we will introduce around 4 new versions of songs that match better the feeling of this era.

Do you already have the songs selected?
Well, we still have to rehearse them a little, but I know that “Until Death” is on the list, “Tragedy For You” is also on the list; we will rehearse and make clips for those tracks and we will improve the sounds. This is important, there are better sound systems now in America, so all that is like a bonus we can use.

How is your live set up going to be? Any particular equipment? Are you going to use your vintage synths?
Since we have a lots of sampling going on we use a computer and controller for the samples, and we have like you saw, an electronic drummer. It is still going to be very physical, we have of course the 2 singers. A lot of people used to say that electronic music is kind of boring, because it’s guys behind laptops, we want to keep it different. We have the drummer, the vocalists, and keyboards. Daniel is also playing keys at the mixing booth, so we have a third musician there. He is also mixing in the different tracks live. This is why there might be so much difference between one live show and another, there’s a lot of improvisation.

Are you planning on recording any live performances? To document the tour?
We always record our live shows, so there is always the possibility that we might release live tracks in the US. For this tour and or maybe later, it’s possible that we’ll be coming back in April for more shows here, in other cities that we can’t cover in this run, such as Denver and Quebec, so it’s possible that we’ll come back and then have a full recording of the 2017 US tour. So scream during the live performance and you might hear yourself!

You have a pretty long tour just in the US, so on that note, what are the things that you miss the most from home, from your house?
Real chocolate. It’s hard to say what I’d miss from home, because for more than 35 years our life has been on the road, we live on the road. It’s like asking a sailor what he missed from home. But I’d say, for me, it is the simple pleasures, like walks with my dog. Some kinds of food maybe. Or having a drink with friends. Nothing fancy.

I hear some rumors that this might be the last Front 242 tour. Are there any truth in these?
It is possible. It has been a long road, and everyone has projects, not necessarily music projects, but it could be. You can’t forget that it’s still the same guys from the beginning until now. We’ve stuck together and I think it’s probably one of the last US tours that we will do. We’re not announcing it that way because you never know what the future will bring. I know that there’s one or two guys who are less keen about touring. Not the the guys on stage, but among our technicians. The problem sometimes is in the US, it takes us 2 or 3 years to come around each time, it might be the last one here. This will be a good time for fans to catch us in the US.

Do you think there is a comeback to the 80’s going on? In the sense of samples and throwbacks.
There’s always this sort of revival towards the 80s, you always have new wave parties, or 80s electronic music fans really sticking to that kind of music, so it’s always in the air. It is likely that there is a comeback to the source, why? Because in the story of electronic music the 80s is the start of popular electronic music. Sometimes you see DJs or new artists who want to come back to the pure analog sounds, they come back the the old instruments. It’s like a reflex. For rock music you’d go back the the blues, the beginning of electric guitars. The reference for electronic music, the pure sound of the beginning is the 80s. It’s how you learn, a back to the roots. I know a lot of DJs that do great techno, but them they want to create music, they reference the 80s, the instruments used back then, etc..

Is there any new band or dj that has caught your ear recently?
Yea, as I was saying, there’s this guy from Vitalic, he’s coming back to the 80s with his sound and ways of making music. The Hacker and Gesaffelstein are in a similar process.

Tell me a little bit about your side projects? Are you working on new music?
At the moment I’m working on some new tracks, I don’t know where they are going to lead, I just released an album of the band called Underviewer it’s a project with the singer of Front 242, very minimalistic electronic music, this project is from the 80’s. I gathered the tapes of the real time recordings we had, and worked on the instruments with new equipment, but always with instruments of that time. I didn’t allow myself to use modern technology to make the music again. So it is a very purist of project. I am very active at the momment.

Underviewer was the project existing before Front 242?
Yes, that is correct.

What can fans expect from your show here in Miami?
The club we are playing is new, we will be the first large show happening there. We also did the last concert at Grand Central, which used to be not too far away.
You can expect a very compact show, it’s going to be very powerful, we have new versions of tracks, a little more aggressive. It also depends on the mood of the singers, but it tends to be energetic. Expect a powerful show, not heavy metal, but definitely heavy electronic music. The band is in a great shape and there’s a good vibe, so we expect to have fun!

September 21st, Front 242 @ The Ground with Mystic Bill and Nina Belief
Get your tickets here
Follow the Facebook event here