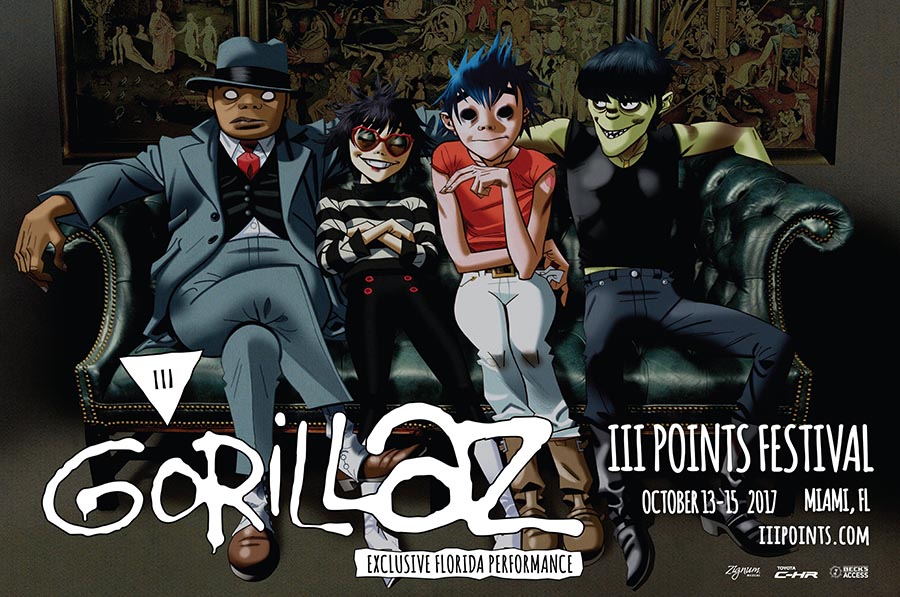 This morning III Points Music, Art and Technology Festival announced that Gorillaz will headline this year’s festival in October!! This extremely rare performance will be the only Florida stop for the band, in support of their long-awaited new album, Humanz, set for release on April 28th. It will also be the first EVER Miami show for Gorillaz, who have only performed 58 shows in their history as a band. In its fifth year, III Points will take place October 13-15 at Mana Wynwood in Miami. Very limited pre-sale tickets will be available to the public for a short time before the full III Points lineup is released later in May. Tickets can be purchased online at iiipoints.com on 4.21. South Florida locals will have the opportunity to purchase tickets in person only on 4.20 at The Anderson at 709 NE 79th St, Miami, FL 33138, starting at 3pm.  The 3-day general admission ticket will be available for a limited time for a special price of $111 (+ taxes and fees) and VIP Foresight Passes will be available for $245 (+ taxes and fees).

Last year, III Points had 25,000 people in attendance for an epic weekend with performances by M83, Redman and Method Man, Thievery Corporation, Flight Facilities and Dixon, along with countless trendsetting music acts and local talent. The NASA-backed installation, Mars 2030 debuted at III Points transcending physical space with a multi-sensory 3D rendition of Mars. The Sunset@Noon art installation took Vaporwave culture into a physical realm with Internet-based aesthetics and interdimensional audio components. In its’ fifth year running, III Points will present the most impressive production yet, with soon-to-be announced lineup of cutting-edge musical acts, visual art and innovative technology.

ABOUT III POINTS:
III Points Music, Art and Technology Festival was created to fill the void between the South Beach lifestyle that had been synonymous with our city and the cultural renaissance that was bubbling across the bridge. We set out to create a platform that will showcase our Miami-based music acts, along with local thinkers, dreamers and doers that are reshaping our community. III Points launched in 2013 featuring James Murphy, Jamie xx and DJ Shadow. Subsequent years included Lykke Li, Flying Lotus, Metronomy, Chet Faker, Jamie Jones, Duke Dumont, Cashmere Cat, Thievery Corporation, M83, Redman, Method Man, The Martinez Brothers, Flight Facilities, Nicolas Jaar, Run The Jewels, Panda Bear and many more.

III Points is a multi-day music, art and technology experience. The festival curates a lineup of cutting-edge talent, large scale art installations and experiential technology. III Points Presents is an expansion of the III Points brand, hosting smaller scale productions throughout the year during signature events such as Art Basel and Miami Music Week, as well as one-off shows.