We have ourselves a trifecta. New EP, new video and a show announced for Friday! If you’re weak of heart, proceed with caution. For pregnant folks, your offsprings first word will probably be “Papaya”.

While it is usually not on the tourists brochure, Miami is one of the hubs in the world where madness and music meet. The Magic City has a very serious scene for experimental, noise, glitch and all other subgenres that don’t fir into mainstream definition. And then there’s Miami Bass….. Imagine dubstep/rap, add a lot of LSD, queernes, 80’s style neon lights and maybe you can imagine how weird this all can get. We love it, and wouldn’t trade it for anything.

Otto Von Schirach is royalty when it comes to getting down and getting weird. Hailing from the sunny Miami, he’s gained followers from all over the world for his brand of “mess with your mind and make you dance” electronic music. The flag bearer of Miami Bass (among other genres), Otto Von Schirach has made a name for himself by incorporating many Miami related themes into his music, such as tropical fruits (just mentioning a papaya in Miami  now makes people think of Otto), the sun and heat,  the rap and latino culture, and of course the influence that mainstream electronic music has had over his hometown.

In his lates installment of brain liquefaction for the masses, his lates EP Draculo (a lovely combination of spanglish combining the words “Dracula”, the famous vampire, and “culo”, witch means butt in Spanish) includes the track “The UFO Is Waiting”. The single sees Otto Von Schirach take a minimalist, glitchy trap direction, maintaining some classic references to his iconic Bermuda Triangle (a topic much mentioned, to the point that a large part of the Miami bass artists are part of his “Bermuda Triangle Posse”), avocado trees,  and aliens.

The video is an intense visual experience, but instead of the expected flashed and distortion, the clip relies on old school techniques such as costumes, dancers and colors. Wanna see what I’m talking about? Let’s check it out and then you will also be a worshiper of the avocado tree! Side effects to this track might include loosened bowels and liquified brains!

Otto Von Schirach will be celebrating the release of his latest EP Draculo at 1306 this coming Friday, June 15th. With him on the bill is The Galactic Effect, another mover and shaker of the Miami bass scene. The show starts at 10, and promises to be a fun time. I’ll let you know, ’cause  plan to be there. He also will be touring Europe in late June and early July, so if you happen to be over there, put that in the calendar!

1306 is located at 1306 North Miami Ave, in Miami (wow, really??), Florida. They have a full bar and also have a surprisingly good food stand. So dinner is not an excuse to arrive late.

Like the music? Make sure to click on this link and support Otto Von Schirach on your favorite platform!! 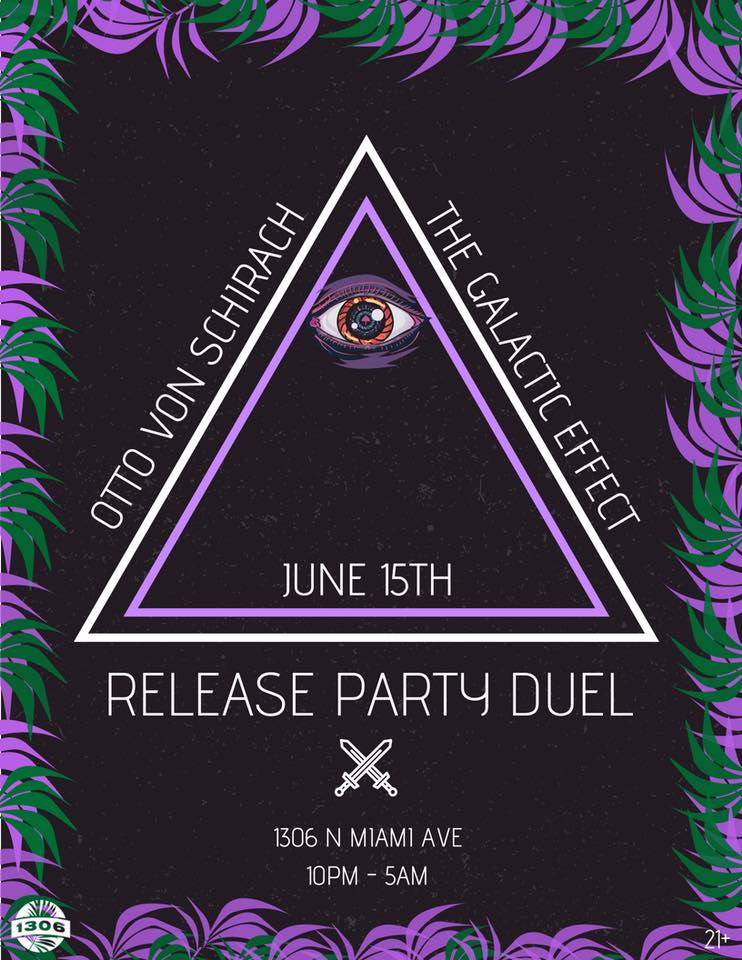