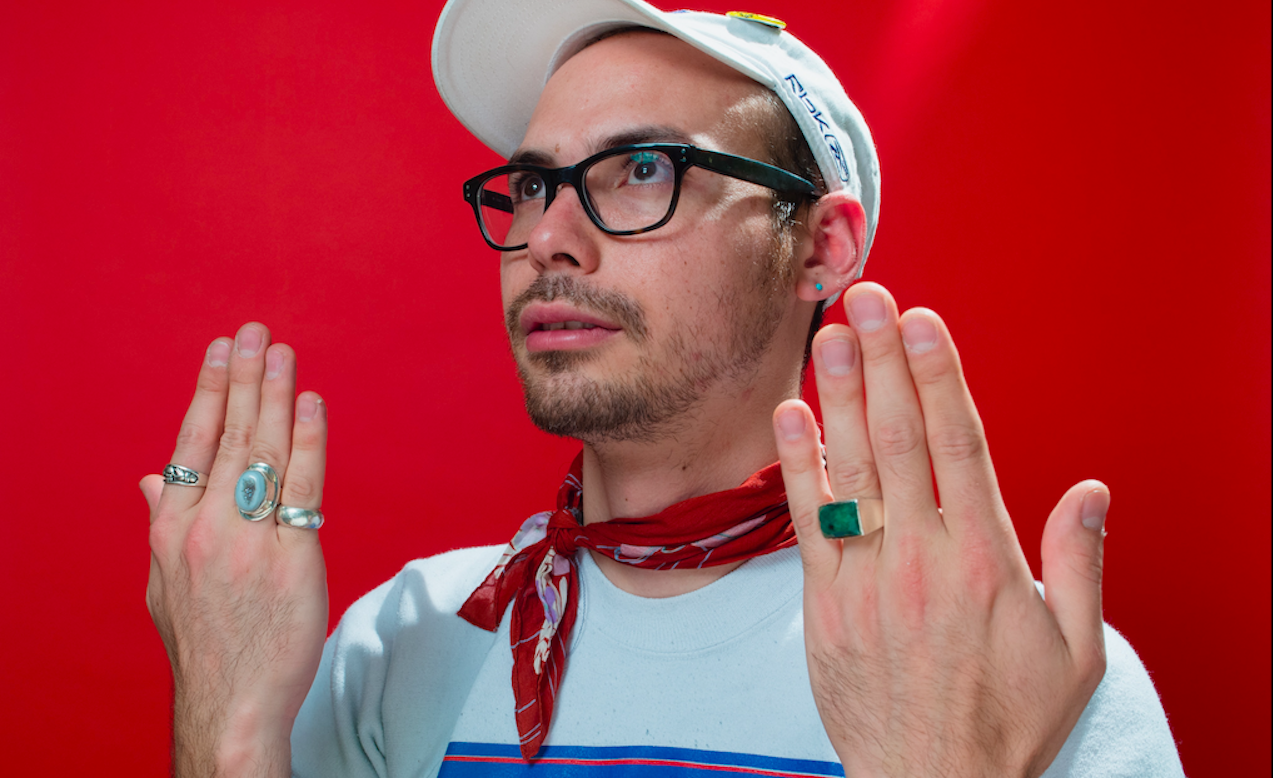 Out today –  Jesus Vio premieres the second single, “Chocoli”, from his upcoming Dutch Science LP, alongside its visual counterpart.  The album will be his first major release as a solo artist since the dissolution of Free Pizza, which he co-founded in 2009, and which decidedly rode out the golden era of DIY. Dutch Science will be out this spring on the legendary Western Massachusetts label Feeding Tube, the longtime benefactors of artists operating on the fringe of obscurity.

Though not a dramatic departure from Free Pizza’s notorious Cowpunk sound, Vio has certainly launched himself feet first, with his first two releases, into his own, very unique brand of whimsy and artistry. Written during his time in Nashville, the punk-pop track was inspired by “the desire to make meaningful connections and decisions while still exploring the depths of yourself”. Both the single and the video fit this manifesto then, as  “Chocoli”’s distilled yet infectious sound implores synchronized jumping up and down by 3o seconds in, as the collage-like video stirs the child within. Vio is a multi-media artist who has lived everywhere from Chile and the US to Berlin, and you can hear it. Layered influences dance through the relatively straight-ahead pop hooks, creating a truly interesting sonic experience.

Perhaps I’ve been primed by the sudden rise of ASMR in popular culture, but the video is somehow deeply psychological. Literally and metaphorically a feast for the eyes, jello is smushed and deviled eggs caressed during a 1: 57-second wonder of sensory euphoria. Like a low budget party at Versailles (post-revolution), the kaleidoscopic collage of colors and food play excites on a molecular level.

The video was made in collaboration with fellow visual artist Coorain, whose work has tended to focus on queer aesthetics, montage and text/image relationship, with a strong undercurrent of philosophical theoretics. Their vision on this video is truly that, transposing the playfulness of the song to visual form.

TML was lucky enough to eavesdrop on a Q+A between the collaborating artists, check it out along with the video, below:

Coorain: Who is, like, your biggest inspiration right now?

Jesus: Alexandria Ocasio-Cortez, the U.S. Representative for New York’s 14th congressional district. Her values, bravery, and language are very inspirational. She not only stands up to fix problems but gives me enough space to envision what the future would look like after we fix the problems. She breaks my nihilism, makes me feel like I’m not alone, and inspires me to keep working on my art and music, like I’ll be heard.

Coorain: What is your favorite American Dream?

Jesus: My favorite American Dream is the one lots of us have been having but not fully designed yet.  After we have free education, free healthcare, paternal leave, raised minimum wage, bettered the treatment of immigrants, de-privatization of prisons, wage equality, decriminalized drugs, less bullying in schools, reparations, gun control, sex education, ended police brutality, ended white supremacy, and accurately recognized the struggles/histories of women, LGBTTQQIAAP, people of color, natives, latinos, immigrants, the disabled, Muslims, Jews, working class, sex workers and any other marginalized or disenfranchised groups in our history books and politics, my American Dream will come to full design. I see a place where we can work hard, have open minds, be ourselves, feel valued, afford a living and love our country.

Coorain: Which one of the Scooby Doo characters are you?

Jesus: I like Scooby. He’s a dog, so he’s really brave and loyal, even though he’s not scared to come off as scared. He has really fun owners and gets Scooby snacks. His voice is funny, cute and I wish I could do a “Scooby Dooby Doo!” like him. I also love that you can ride him like a motorcycle, vroom vroom!

We over at TML certainly can’t wait for what is next from these artists!