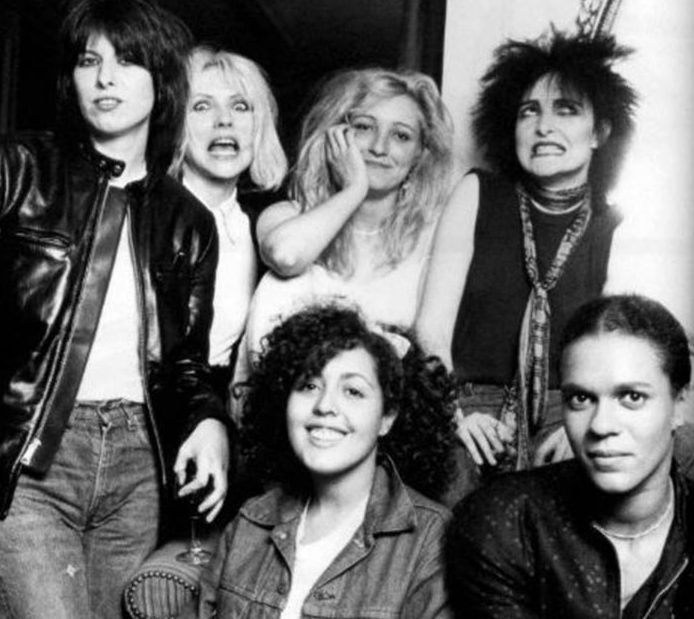 Back in June 2016 punk icon Viv Albertine, a member of pioneering all-female band The Slits, was asked to speak at the British Library’s Punk 1976-78 exhibition in London.

While in conversation with music journalist Jon Savage at the event, Albertine took the opportunity to redress the gender imbalance in an information panel that forms part of the exhibition, Pitchfork reports.

With the text only mentioning the contribution of punk bands with male members, such as Sex Pistols and The Clash, Albertine used her sharpie pen to add the names of three punk bands with female members: The Slits, X-Ray Spex and Siouxsie and the Banshees.

She then annotated the panel with a very pertinent question, “What about the women!?!”

Picking and honing down a Top Ten list is never easy, especially when struggling with previously under-documented subjects like women in punk. Though women co-pioneered the genre, forming the indelible face and sound of the underground singing for the likes of the Bags, the Avengers, X-Ray Spex, Blondie, and Siouxsie and the Banshees, majority-female bands have often slipped beneath the radar of many critics, pollsters, and everyday fans. My plan here wasn’t to list a definitive “must-have” compendium of records to seize and sell. It is to foster discussions about key, even breathtaking bands, armed with desire and dedication.

An on a personal note, I’d like to dedicate this article to Piero Rodriguez who shared my love for female fronted post-punk, goth & riot grrl bands and inspired me to write this article.

Kim Gordon formed Sonic Youth with her ex-husband Thurston Moore in 1981. She was not the typical girl singing in a band propping up the boys. She was sexy in a strong, cool, tough-girl way. This video is a perfect snapshot of 90s fashion featuring Kathleen Hanna of Bikini Kill dancing and Kim Gordon’s fashion line X-Girl.

This was the debut single for english band The X-Ray Spex. This video is a clip from the documentary Punk in London covering the Great Britain punk rock explosion of 1977. Classic punk with a sax and a powerful female attitude up front.

Debbie Harry has admitted that “Atomic” was written with the global hit “Heart of Glass”  in mind. But somehow spaghetti-western guitar got added to the New Wave and disco mix, and the song turned out way more futuristic and foreboding than planned. A cool fusion of the band’s many styles.

Black was the founding member of ska band The Selecter who were formed in Coventry in 1979 and are credited with starting the ska revival movement. Basement Jaxx sampled this track in 1999, “Same old show”.

In the video, lead singer Chrissie Hynde was a waitress, implying the “brass” was the change she got from tips. Hynde worked as a waitress in the US before she moved to London in 1973.

Note in the video when James Honeymoon-Scott points to the daily special tag on the cafe menu he is holding, at the same point the lyrics of the song hit “I’m special, so special.” Pure corn… but funny.


Watch lead singer Ari Up perform crazy dance moves in a public park before an unsuspecting group of “normals.” She looks pretty great with her short skirt, boots, red blazer, and long bangs. The ban recently made the news due to the actions of band member Viv Albertine’s hard stance on female influence in the history of punk. Good for her!

Socialist post-punk dance-floor agitators, Delta 5 were closely aligned with the Gang of Four, who mixed music and left wing politics. Their thumpy, double bass guitar-led funk attack, slashing guitars and flat, bored female vocals made them sound like a tighter version of the Slits mixed with the Gang of Four’s razor-sharp guitar lines. In 1998 Electroclash girls Chicks on Speed release a cover of the song.
3. Bikini Kill (Kathleen Hanna) – Rebel Girl – 1990

Bikini kill was an American punk band formed in 1990. The band is widely considered to be the pioneer of the riot grrrl movement, and was known for its radical feminist lyrics and fiery performances.in 1998 Kathleen Hanna went on to form electroclash super group Le Tigre. Known for its left-wing sociopolitical lyrics, dealing with issues of feminism and the LGBT community.

German New Wave/Cold Wave group Malaria! were one of the most interesting groups to come out of Germany in the early 1980s. The all female band was formed by an alliance of Berlin art scenesters Gudrun Gut—an early member of Einstürzende Neubauten—and Bettina Köster.

Hong Kong Garden took what would become known as post-punk into the mainstream. This was the first of 17 Top 40 singles that Siouxsie and the Banshees achieved in the British charts.

If you think the title sounds like the name of a Chinese restaurant, you’re right. Said Siouxsie: “I’ll never forget, there was a Chinese restaurant in Chislehurst called ‘The Hong Kong Garden.’ Me and my friend were really upset that we used to go there and like, occasionally when the skinheads would turn up it would really turn really ugly. These gits were just go in on mass and just terrorize these Chinese people who were working there. We’d try and say ‘Leave them alone,’ you know. It was a kind of tribute.” (from Punk Top Ten Interview, August 6, 2001).