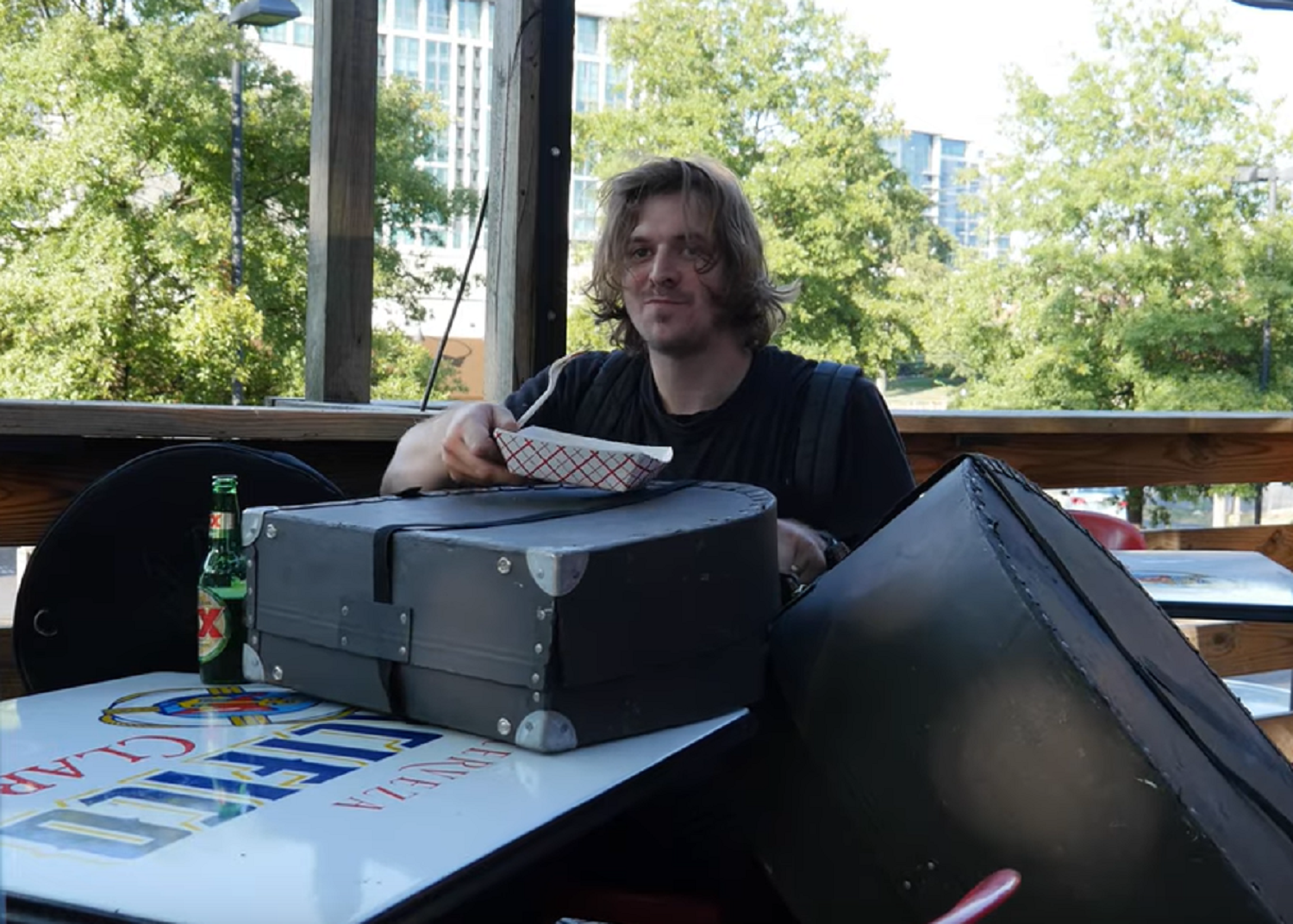 With a hearty yawn, Reed Stewart awakens from his slumber in a bed of drumsticks, and in three-seconds flat, he’s ready to start the adventure that is his music video for the song “Batterie.” Shards of a metallic melody come cascading from above in the background, but our focus is initially geared towards the imagery in this portion of the video, which is by far the most consistent and stable of the nearly three and a half minutes that the song will last. Visions of forestry and an open flame are intercut with our bedside introduction as if to suggest that we’re inside of a since-lapsed memory, or perhaps in some sort of a continuation of whatever dream Stewart was having the night before, but they’re the least of the surrealism to greet us in this fantastically strange exhibition in experimental rock.

Watering plants, striking cymbals in the middle of nowhere, toying with lighter fluid and indulging in a street taco are all on the board for today’s activities in “Batterie,” but as the video begins to blossom into a total art house piece, the music starts to take over the lion’s share of the spotlight. The percussion pitter-patters against the grain of a mild electronic melody that Stewart punctuates with his soft, decadent vocal. He’s careful to avoid any sort of excesses in “Batterie,” and unlike the efforts of his closest rivals, makes a point of mixing the instrumental half of the track with a lot of spacey, almost ambient textures that lend all the more to the psychedelic vibe of the verses.

Following an epic percussive breakdown, the beat finds a steady groove to follow around the 2:18 mark in the song. This doesn’t dismantle the avant-garde edge of the melodies at all, but merely inserts a bit of swing into a rhythm that was wholly devoid of any movement just moments before. Is it jarring? Not as much as it would seem on paper, but it’s still an opulent oddity if there ever was one. Stewart’s vocal transcends its place in the angular harmony for a fleeting moment as the song reaches its conclusion, and in this moment it becomes almost angst-ridden and rebellious in tone. Beneath the surface-level absurdities, “Batterie” has a very commentarial feel to its implied narrative that seems like a more than appropriate response to the trending postmodern pop movement among indie artists in the United States right now.

Reed Stewart delivers some seriously crushing content in his new music video, and though I was anticipating quite a lot out of its debut, I was pleasantly surprised to find all of my expectations exceeded and then some by what it has to offer all who give it a look this September. “Batterie” is a challenging, often neurotic composition that pushes a lot of creative boundaries for its performer to the very limit of melodic acceptability, but much to the credit of Stewart, the song ends up being one of the more charming releases of its kind due to the meticulousness of its sterling arrangement. To put it as simply as I can, “Batterie” should be regarded as required listening if you’re a fan of provocative alternative music.