Baeksa and Young are tattoo artists from South Korea. Based in Seoul,their shop it called Opium Tattoo, and their practice it not a common one for their country. Contrary to the United States and Western Europe, were tattoos are as common as other fashion accessories, in South Korea, many people regard people with tattoos as anti-social. Usually, tattooing is legally controlled in daily life, classified in the same category as acupuncture and other minor medical procedures.

But sometimes, you get folks like Baeksa and Young, that break these social norms and follow their hearts. And lucky for us that they do, because the world is always in need of more art, more artists and more people that love art. And if it happens that this art is on living, human skin, then so be it.

We had a small conversation with them, while they are visiting Miami and guest tattooing at Rosa Negra Tattoo in Allapattah. They’ll be in town till the 15th of August, so if you like what you see, hit Rosa Negra up!

(You can find Baeksa and Young in the center of the photo above, with the staff of Rosa Negra Tattoo on the right, and some friends traveling with them on the left)

What is your Artist/Tattooist name? Have you ever been known by another name while doing this kind of work?
Baeksa: My tattooist name is Baeksa.
Young: It’s 02. My real name is Young, and 02 sounds similar to “Young” in Korean. That’s why.

How did you get involved in the world of tattooing?
Baeksa: When I was studying Art at University, I met a tattoo artist by chance. I felt amazing and disappointed at the same time when I saw his tattoo work. So I started to looking for tattoos and I fell into it.
Young: I had depression. I started to get tattoos to refresh my feelings. And one I knew about tattoos, I thought ‘this is it’. It was very attractive to me because I think that the two people, the one who gets the tattoo and the tattooist, are doing art at the same time. like an interaction of some sort.

When did you do your first tattoo on someone else?
Baeksa: I did my first tattoo on my best friend 11 years ago. We were worried about which design would be good, and we decided on a tribal style Jesus. I was not used to tattooing so it took 8 hours, and he said it was really painful.
Young: It was more than 2 years ago. Funny thing is that I did my first tattoo to my ex-boyfriend. He was my ex at that time. He made a promise that he’ll get my first tattoo when we were dating, and he kept promise even though we broke up. But I heard that he covered up his tattoo last year. Haha

Has your style of art evolved over the years? When did you find the style you do now?
Baeksa: My style of tattooing keeps changing. Recently, I’ve been doing pop-art style, since about 2016. I started doing this because everything around me can become a theme, and I like that I like that I can sublimate into art.
Young: I always wanted to put some stories and feelings in my tattoo design. So my drawings became more abstract, and doodle style. I think my style will be keep changing, but this basic frame won’t. Story, feeling, abstract and doodle.

What has been the work you are most proud of? Any one tattoo you always like to talk about?
Baeksa: It’s hard to choose which one is my favorite one. I tattooed each and every piece because I liked it.
Young: Kasper, a Korean rapper, her tattoos are almost all done by me. She often tells me what she wants to get tattoo, and the process we make is always fun. The design is not 100% my style. It’s my style 50% and hers 50%. That makes me more exciting, like a collaboration. And she never gets tattoos in black ink, only color. That’s one of the funnest parts. Because I love using many colors. It’s always challenging and exciting to working with her.

Can you tell us some crazy requests you’ve heard by clients?
Baeksa:There’s not a lot of crazy requests because I start working when I like the requests. But there’s one episode… A woman that got tattoo from me lost her temper that it was not the design she wanted although she saw the design before getting tattoo. 3 months later, she texted me that she was very sorry and she likes the tattoo very much.
Young: Once, I threw an event for free lettering tattoo to celebrate something that I made a promise long time ago. My mistake was that I didn’t make a limit of the size. A man came and got a 10 inch long lettering tattoo for free! Galaxia: Get your dose of local, young, and original artists during this Art Basel week! 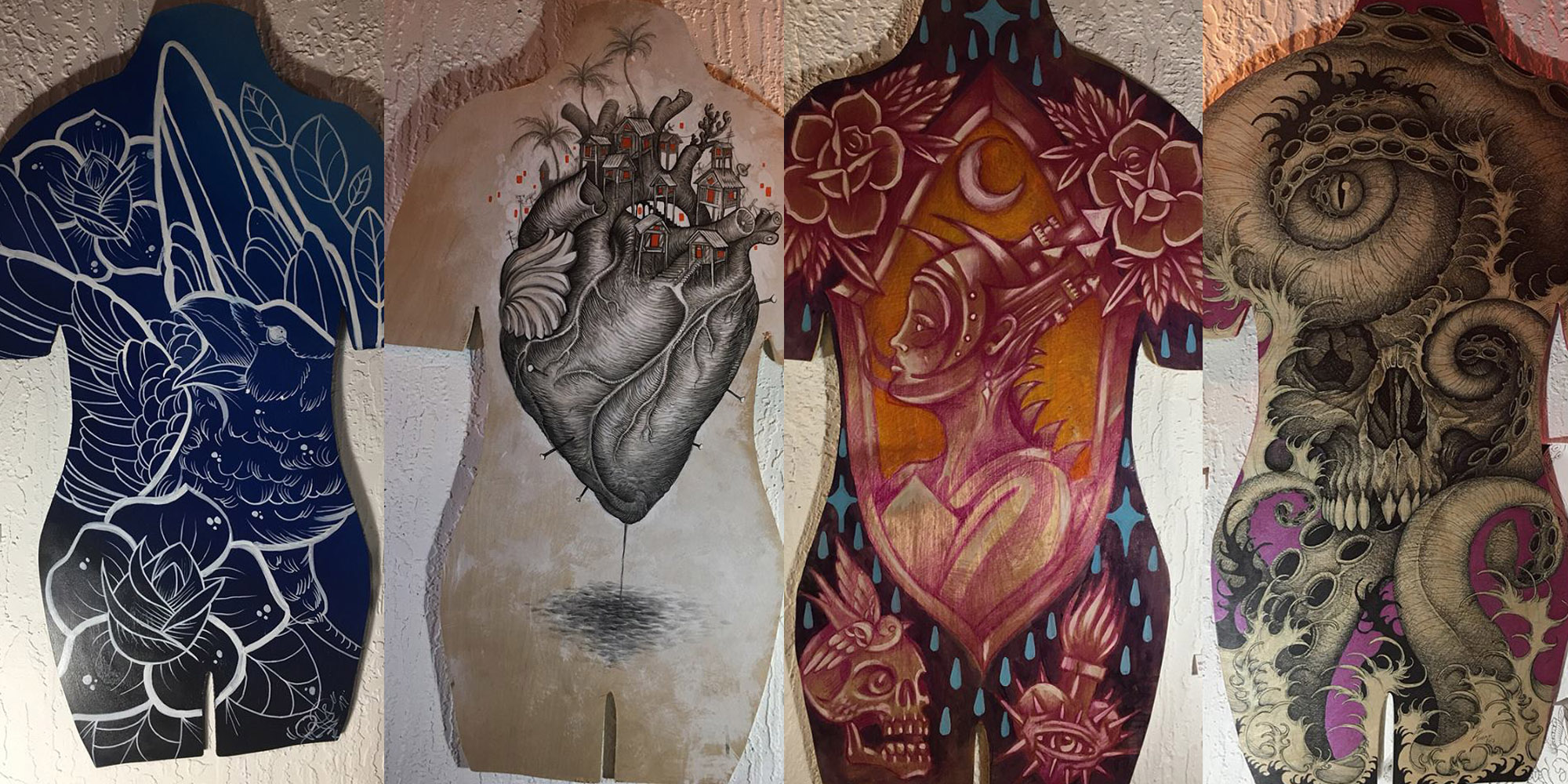