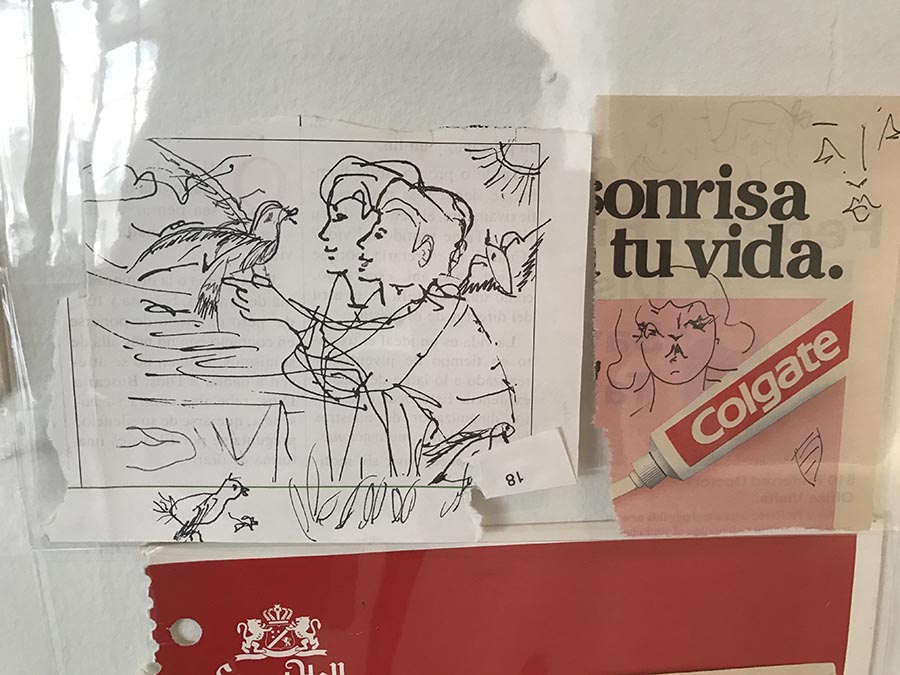 Stories from the Unknown

Angela Valella inherited her mother’s letters and notebooks, ending up with boxes and boxes of a prolific writer, who had handwritten or typewritten in every genre, from poetry to novels, essays and theater, auto biography and letters. Included were many of her drawings as well.

Discovering all the worlds that her mother had kept secret, she debated on what to do with them, while unveiling them from the dust, debris and vermin it had collected during the years.

Through her life, not only she was never published, but she didn’t let anyone read her work. But on close inspection, sharing them with a book publisher, they found out what seems to be clear instructions of how they should be read, or even published.

This material is the base of Angela’s exhibition, that features about 800 pages of her mother’s writings and drawings, displayed along with her own artistic work. She says the exhibition hides many other collaborations or appropriations, such as from her son and other family members.

Angela borrows the title of her exhibition from Stefan Zweig’s novel Letter from an Unknown Woman, which was made into a movie by Max Ophüls in 1948. And just like the character out of a book or movie, Angela’s mother Araceli is displayed throughout this talk by the artist , guided by the curiosity of curator Nerea Ubieto and questions of the public, which in many cases seemed to have known Araceli during her life.

Araceli came from a very poor family, and was orphaned at 14, when she had to take care of her many younger siblings in their town in Cuba. When she got married she was able to leave that role behind and move to La Havana, and eventually migrated to Miami. She had a strong temper, and used a lot of her writing as a way to elaborate on her personal conflicts. She seemed to have been an eccentric and creative character, that had many friends. She spent her last years in an elders home, where she moved around like a diva, wearing flamboyant dresses, singing opera accompanied by another resident that played piano, performing to spread joy to others. But always closing the door of her room with a sign reading “Do not disturb, I am working”. On her writings, everyone knew.

“She found pleasure in the mystery of not presenting herself openly.” Angela remembers, and wonders out loud about how many artists we wouldn’t know if someone hadn’t found their work after their passing, like Fernando Pessoa’s Book of Disquiet, and Kafka’s Metamorphosis. There is a beautiful documentary that shows a story of this kind, Finding Vivian Maier. Maier lived as a modest babysitter, but somebody discovered by accident her photographic work posthumously, and only after a lot of digging her work and her myth became famous, and now inspire many people. And how many artists will never be recognized. How many of them could provide inspiration or leave legacies for next generations, but that will never happen because they are taking their work to the grave?

A woman that knew Araceli argued that we can’t display someone’s private writings, like exposing her journals and secrets for everyone to see, but the artist and curator would argue about the responsibility towards those who came after. And sharing the inspiring story and work of a woman, that lived her life as the heroine of a novel, ending with the dramatic gesture of leaving all her long guarded material to be read, it seems that exposure is what she would have wanted.

Angela repeats the idea that “the character killed the artist”. She thinks she knew her mother well, but by reading her work she felt “the closer I got to her, the further I was”. And curator Nerea quotes Joan Didion “We tell ourselves stories in order to live”.

Letter from the Unknown, an exhibition of new work by Angela Valella at CCEMiami

The exhibition will be on view until May 2nd, 2017 and it is part of the program of Creating in Feminine.

NEREA UBIETO (Spain) is an independent curator and art critic. She has been recently awarded with the HIAP Residency Programme in Helsinki. Among her recent exhibitions are Keep calm and carry on at Tabacalera in Madrid and El barco de Teseo at various institutions in Latin America.