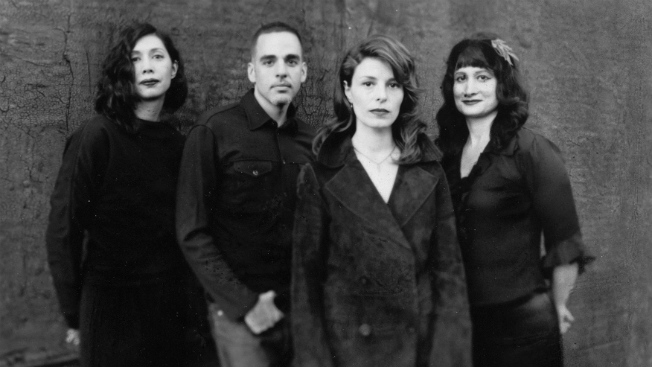 Susan Ottaviano on Celebrating the 30th Anniversary of Book of Love

This Friday, April 28th Book of Love will play a show at Culture Room, in Ft. Lauderdale, as part of their 30th Anniversary Tour. After a hiatus of several years, the iconic post punk band is not only back on the road but also with a new release called “All Girl Band.”

Some days before the show we had the chance of talking to one of the founders and singer of the band, Susan Ottaviano, who shared with us some behind the scene stories about Book of Love, how was the scene back in Philadelphia in the 80’s and what it meant for them to tour with Depeche Mode when they were just kids.

You’re going to be playing Fort Lauderdale as part of your 30th Anniversary Tour. Could you take us back to the the time Book Of Love was formed in Philadelphia, how was the music scene back then?

Yes, I was in a band with Jade that Ted was involved in, in Philadelphia. We started another band, we were part of the post-punk music scene and we were listening to a bunch of really good bands. Ted was the writer and we moved to NYC and sort of focused on music and formed Book Of Love. There was a lot of energy in the scene, great artists and clubs, a lot of artists that became big in the 80’s where there, it was a very exciting time.

You also produced some compilations, you were not only playing your music, but  also contributing to the scene, correct?

Yes, we were part of that scene in Philadelphia and then we moved to NY. Book Of Love started in NYC. Jade and I went to Philadelphia college of art, we where all art school kids.

For any band just starting to tour, touring with Depeche Mode must have been a game changer. How was it, who contacted you, how did it all happen?

Well, “Boy” had only been out for a couple of months and we were on the Depeche Mode tour 3 months after the single was released, it was a desired connection, Depeche Mode was going out for Some Great Reward, so Seymour Stein came up with the idea and we were off to the races before we had too much experience. Before that we had only played to like for 200 people. All of a sudden it’s stadiums, a trial by fire. It was an awesome experience.

Do you have any particular anecdote or story that you’re fond of from touring with DM?

We had a lot of great shows when we played in Europe, and in Red Rocks in the US, there were some very special times, we were very young and kind of struggling. In Europe sometimes people had been waiting for a whole day or even more to see Depeche Mode and weren’t too fond of seeing us, I remember seeing that a lot. And they (Depeche Mode) helped us, they taught us how to, you know, manage the crowd and so on. It was definitely a challenge.

What is the story behind “Boy”? It is a song I particularly like a lot and it is one of your most famous tracks.

Definitely, I think it is a song that really defines us, I think that all people that feel like a misfit at sometime or feel like an outsider can really relate to that song, it has meant a lot to a lot of people and that is very rewarding, to know that the song has made a difference.

And how did you write the song, where you in NY or Philadelphia?

I wrote that song, and that’s when Book Of Love came to be, truly.  You know, when we started in Philadelphia we were part of the scene, and we had the energy, but we really didn’t have the songs. And then Ted changed our direction and he became composer and songwriter and led the musical direction to this group now.

You took a break from the band for several years, what do you do besides playing with Book Of Love, are you an artist?

I’m an artist and I’ve also been a food stylist for the last 15 years, I do food for TV and magazines, it is good. But now I’m back on the road. The arts are a difficult thing to maintain and sustain, but it is, you know, my great love and it is great to be back in music. It is a challenging world. It is tough to have different perception to the music business these days. We had a few features on movies, such as Silence of the Lambs, that was good. But people don’t buy products the same way as back in the day, when it was all about making an album.

Why did you decide to reunite Book Of Love?

I think it was timing. Everything has gone a full circle, so at certain times during the 90’s our music went out of fashion, but now people might once again appreciate our music and our work, coming back to what we created. Were not the biggest band in the world, but we were there for  a lot of people. Sort of similar to artists that inspired me to be a musician, they were not the biggest, but you know, they were special.

What do you want people to experience watching Book Of Love live?

Well, I think we’re sort of honoring our catalog and were relearning our music, we have some musical interludes and of course the people’s favorites. This has been a very known band, and we have a kind of a cult following, so we want them to enjoy it.

I also wanted to talk to you about the band’s latest release “All Girl Band”, what’s the story with that one?

Basically, it was inspired by our own story, being fans of post-punk, and we went out to see a lot of all girl bands that were very popular, like The Slits and Delta 5 and The Raincoats. They gave us the confidence and the right to sort of get up there and say ”We’re going to form a band to!” and it’s about going out there ad getting up on stage. It is a tribute to that time period for us. It also goes out to women in music and people starting up into music in these days.

You’re touring for the 30th anniversary, but what are your future plans? Any new releases

We’re working on a live album now, and then possibly working on something new, but we’re trying to figure it out. We haven’t decided what to do, a traditional album won’t be heard the same way as it used to. I feel like getting a little more experimental and interesting, I feel like approach it in a different way. It has been a good year and the fan support has been really appreciated.