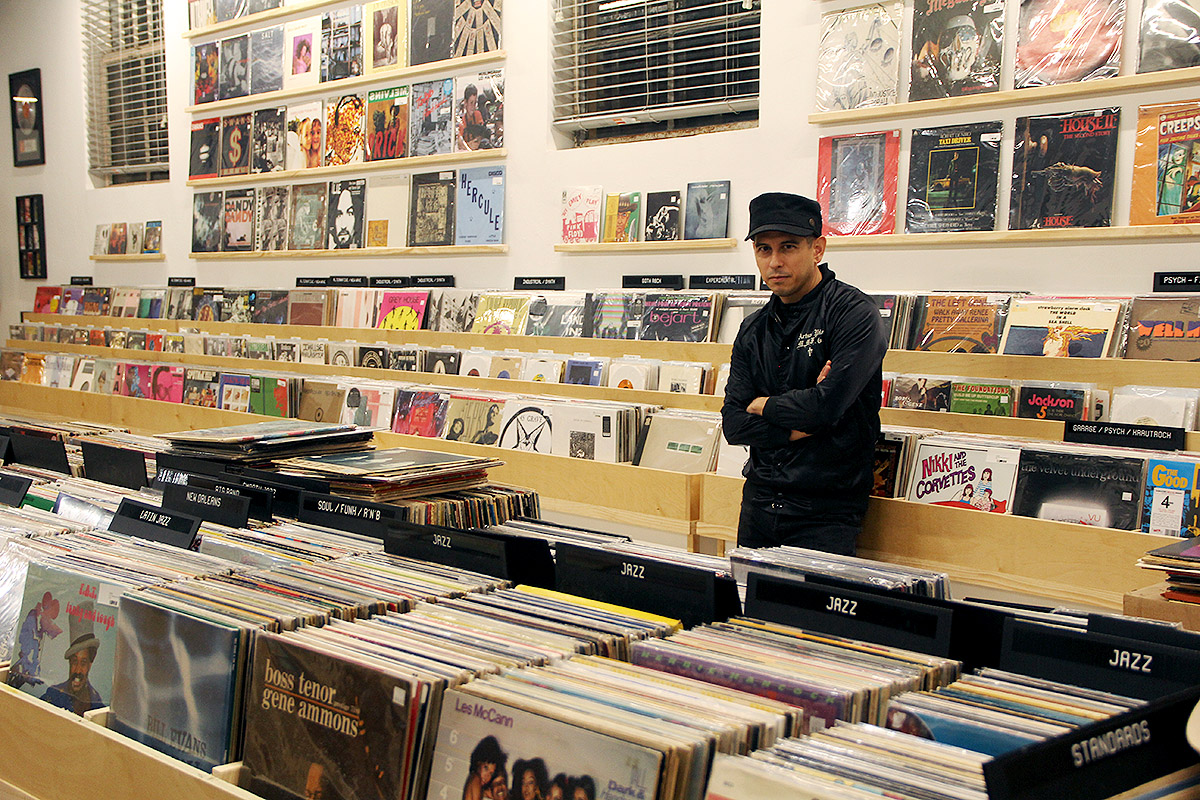 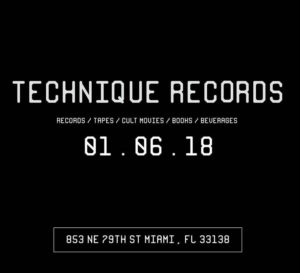 We managed to catch Mikey Ramirez by cornering him while he was working at Technique Records, Miami’s newest record store, which he is opening up this Saturday. He is so busy we had to hunt him down. It was kinda fun.

We caught up to him to talk a bit about Technique Records and what he had to say about it. Located at 853 NE 79th Street, the store is a little bit like a music lover’s toy store. It will stock records, cassettes, magazines, zines, books… you name it, they’ll probably have it. The interview touches past career, business, and of course the opening if a record store!

Mikey is well known in the South Florida area for being both the owner of Radio-Active Records in Ft.Lauderdale, and for being a prominent DJ and promoter in the music scene of Miami. When he is not at work (he is at work most of the time) it is pretty easy to catch him spinning vinyl at Gramps on Friday nights, or having a beer or three at The Deuce on South Beach.

So, you’re about to open a new record store, and this will be the second one! How did it all start? When did you decide to open your own store?
This had a lot to do with working in a corporate environment. When I was in my 20’s I was working at Barnes & Noble in Boca Raton, and I am glad that I was there, I learned a lot about the corporate strata of the business, of how it all works, and I was there for 3 or 4 years and did it well, exceeding sales plans, you know, high rating in customer service and whatnot.

But I just remember the sensation that you don’t really know who you’re working for, there’s so many people that you have to answer to, I don’t know, it just left a taste in my mouth that… If I’m going to go and essentially walk the extra mile and make someone else money, what am I doing? It doesn’t make sense.

A lot of it came down to the yearly review of my third year, I think, when I exceeded the sales expectations and plans, but we had this discount card that you had to push on the clients, and I think I was about a percentage below what the requirement was, and did not get a raise because of that. So at that point I said to myself “this is not for me”. 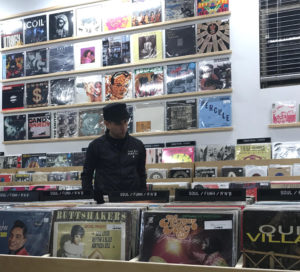 And from there you decided to open Radio-Active Records? There were times when vinyl wasn’t as popular as it is now. How was that journey? Was there a lot of struggle?
Well, what ended up happening is that I actually left B&N to go work at a place called The CD Collector, with my previous partner. We ended up becoming partners and rebranding the store as Radio-Active, that was years ago, and like with anything else, you have to have one foot in the past and one foot in the future. I never say “Stand in the present”, you have to look backwards and look ahead.

Of course there’s struggles, there was a point in time when people were not buying records. The one thing I can say about what we were doing is that we always treated the clients and the shop as if they where us. We were record buyers, so to us the industry never died, the format never disappeared. It’s just that the majority of people consuming and purchasing music weren’t using the format. It was all CDs, then streaming, etc. That’s really it.

You have to put yourself in a position of “Ok, what do I want to see in a record store?” you know, and not just my own personal taste, as a store owner and a DJ, but a store that essentially people would respond to. When you go to Radio-Active, you look at the diversity, but also the organization. I think that’s very important. That’s how we were able to survive the years, both dark times and great times. It’s finding the balance. And this is true to almost any independent business.

Now, with this second store, called Technique Records, here in Miami. Do you think there was demand for the store?
That is a tricky question. To be honest, the best way for me to answer this is that this had more to do with personal reasons. I live really close, my health took a hit this year, I want to spend more time with my family, and I don’t really want to do that commute anymore. My life is not in Fort Lauderdale, it is in Miami, and I’ve lived here for years. There has always been some talk about me doing something in Miami, and I kept putting it off. But it came together when Adam Gersten from Gramps put me in touch with my landlord (for the Technique store), who wanted me to come in here and set something up. I kinda blew it of for a time, because of being busy, but everything came together, seemingly for a reason. I’m not the mystic type, but I feel that it all fell into place at exactly the right moment, and I took the opportunity that was handed to me.

What about the music selection for the store?
Rubbish, all of it! No, not really. You try to put your own stamp on things, but it has to be diverse. Personally speaking, and I know this might sound cliche, my musical tastes have alway been diverse; everything from rap, bass music, jazz, industrial, rock, soul… you name it. You have to put your touch on what you’re trying to do, but you also have to remember, this is not your bedroom, not everyone is going to be into what you’re into. You have to know the market and respect it, so if for some reason country takes off, and people only want country records then you stock up more country. Because it is what the market wants.

To create an environment where everyone feels welcome means you have to listen to the market, and I’ve always tried to do that. This store will be an extension of what I did with the crew at Radio-Active, you know, upgrading ideas and styles. I like to tell people “It’s your store. It’s the communities store. I just pay the bills.”

About the music selection, you brought onboard some people specializing in different styles and genres, to help you curate the specialized sections. What can you tell me about that?
Do you mean the people that are working here? Haha.
I’m glad you asked, because for a long time people think that these operations are all me, only me. And it’s not at all true. I really appreciate what the Technique crew has to offer, especially now. We’ve all been around the block, and have our own experiences. Janette has her own photography studio, she plays in Shroud Eater and been in the music scene for good amount of years, and worked in various kinds of stores also. Rick is a professional musician, been in lots of projects and bands and has his own printing company. We all have our own sense of responsibilities, and that’s very important. You don’t get the same thing with someone on their first job. We can bounce ideas off each others, on the same level. They are here first and foremost because they love music, and are very receptive to what I have to offer.

That is the situation. Having people aiming towards the same goals, and each contributing in their areas. We have nothing to prove to ourselves or to anyone else. I’m very lucky to be here with them, and in this neighborhood, the area has been very receptive to the idea of Technique Records. It feels good.

You’re about to open the doors this Saturday. What can people expect from the store?
They might find my corpse, if I don’t finish everything in time… So that’s that. But more seriously, we want to be really diverse, really well stocked sections, heavily organized.
It will definitely a lot to take in, almost sensory overload, but not to the point where you feel engulfed. It’s everything that you love about Radio-Active plus more. Similar but different, some people will notice resemblances, other will call out the differences.

The full interview will be available online in this weeks Too Much Love Radio Show.