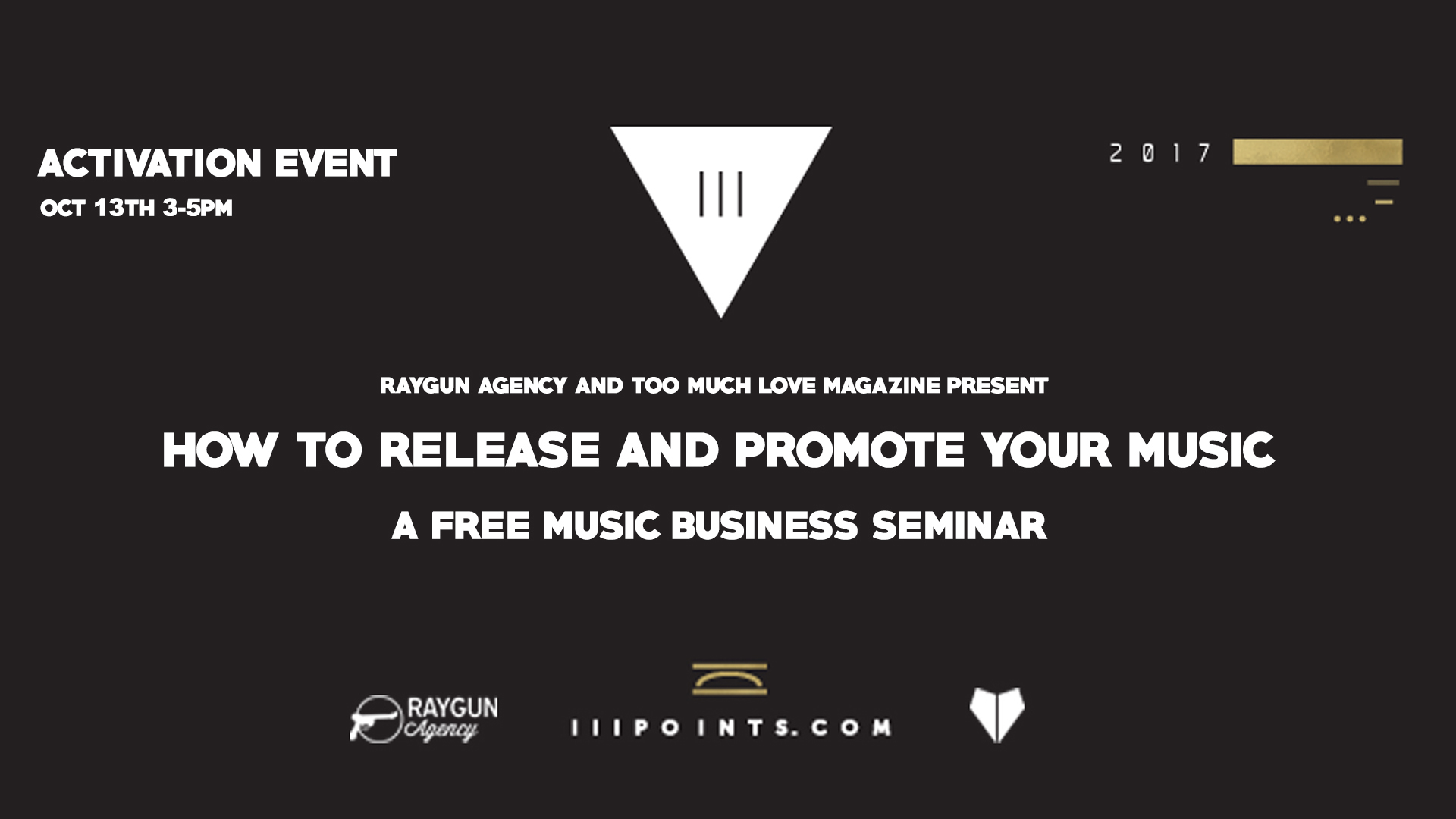 Everyone that knows Miami is aware that the busy season, high season, is winter. In South Florida the temperatures drop to levels considered “lovely” by most of the world, and art, music, hospitality and many other business aspects of the city kick into high gear.

For the last few years III Points Festival, in the Wynwood Arts District, has served as a somewhat unofficial kick off for this high season. It is the first of the big music events of the season and one of the most beloved event by the locals, since it includes many local acts, vendors and voluntaries. The list of acts performing at III Points grows in magnitude each year, and of course, the expectations are higher than ever for this year.

For this reason, and know how many musicians and music lovers will be in town, Raygun Agency and Too Much Love Magazine teamed up with III Points Festival to host one of their Activation Events. The idea of this activation event is to inform, educate and prepare musicians on how to properly release and promote their music, and what steps to take to do so in a way that they won’t mess anything up.

“Too often we witness musicians dealing with consequences of a rushed decision. Whether it be impatience to release their music before it is ready, contracts or agreements not favorable to the artist, at Raygun Agency we see it all the time.” Says Florencia Franceschetti, founder of Raygun Agency. “We decided that it would be in the interest of everyone for us to set up a seminar that can teach everyone the “Do’s and Don’ts” of the music business. We have experts in several areas of the business, including Press, A&R, Legal, and Public Relations”

The seminar will be a panel style discussion, with two sets of three speakers, and a small break in the middle. At the end of each panel there will be a short Q&A session, and at the end of the event there will be beverages served, courtesy of Baron Tequila. During this time, one on one discussions shall be encouraged.

Jose Duran: The associate web editor of Miami New Times since 2008. He has also been reporting on Miami’s cultural scene since 2006. He has a BS in journalism and will live in a Miami as long as climate change permits.

John Caignet: Founder of Jolt Radio, as a DJ and music journalist his focus has been on getting airtime and attention to musical acts that deserve it. Having recenty celebrated it’s 7th aniversary, an uncountable amount of artists at local, national and international levels have passed through the Jolt Studio for an interview or live performance.

Eddy Perdomo:  CEO of Mishu Music, a company based in Miami that focuses on event production. Mishu Music also branches out into musical content creation via its label Mishu Records. Eddy, along with Marco Vicini, was a key figure in the company’s new business plan and re-launch in 2016. He is also largely responsible for the creation and implementation of the House Of Creatives (HoC Fest) music festival in Miami. Before joining the Mishu family, Eddy worked at Sony/ATV Music Publishing for over a decade, holding the position of senior VP for A&R and new talent for the US Latin division.

Kat Bein:  Freelance music and culture journalist with a career emphasis on dance music. She frequently contributes to Billboard, The Miami New Times, Red Bull, Vice, and other outlets.

Matias Lamastra: An entertainment lawyer and musician, for a large portion of his career he worked as a professional lawyer for different record labels such as EMI Music and Universal Music. Nowadays he has opened his own office that offers legal and business consulting for record labels, bands and other music related business. He is also the founder of Tropel Records, via which he published the album “Danza” by the band Todo El Verano, in which Matias plays drums.

Florencia Franceschetti: Founder or Raygun Agency (a music marketing, PR and artist development company) and Too Much Love Magazine (music, art and fashion), she has worked in music business, radio and music journalism for over a decade.  Florencia has worked for various music labels such as Sony and Scatter Records, and recently founded Anti Language Recordings with some colleagues in an effort to create an artist friendly imprint.

For more information about this event please visit the Facebook Event