RSVP to the show, find your ear plugs and dig out the merch money from under your mattress!! It’s time to go see some live Doom Metal!!

On the 27th of this month, doom-metal force-to-be-reckoned-with Windhand will be gracing us (and tearing up our ear drums) with their presence at local favorite venue Las Rosas. Hailing from Richmond, VA, Windhand began carefully crafting their psychedelic meets stoner sound in 2009, and since then the band has put out four full-length albums and a split (with Satan’s Satyrs), making a quick name for themselves across the stoner/doom-metal genres. 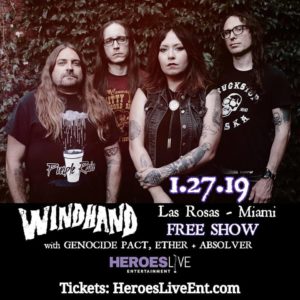 Miami is set to be their fourth stop on a tour supporting the release of their fourth full-length release, Eternal Return. The otherworldly record, that clocks in at just over an hour, was released in October of last year by Relapse Records. It has been three years since their last full-length release, which feels pretty significant, especially since their previous record secured their reputation in the world of doom metal – a tough act to follow if they didn’t take their time.

Since then, Windhand has gone through some lineup changes. Where they were previously a five-member band, they have slimmed down to a quartet after guitarist and co-founder Asechiah Bogdan left the band just last year. The reviews seem to hold the consensus that this album’s ambitions were successful, with frontwoman Dorthia Cotrell’s vocals being praised across the board.
The album has been described as psychedelic, spellbinding, and even grungy. Comparisons have been drawn to Nirvana, which isn’t all that surprising given that ‘Eternal Return’ was produced by Jack Endino, who has also produced albums for Nirvana, Mudhoney, and Soundgarden, among others. While the album isn’t a departure from what you might expect from a doom-metal band (past comparisons to Electric Wizard and Black Sabbath still ring true), the album is impressive, and it will be interesting to see and hear how its energy translates to the stage. Either way, anticipation is high for both those who saw Windhand live in Miami back in 2015 – and those who didn’t get the chance.

Other acts playing the show include DC-based three piece death metal band Genocide Pact, (who are Windhand’s labelmates as well as their tour partners). We also have two other South Florida based metal bands: Ether, a stalwart name in the Florida doom scene that just signed onto Century Media Records, and Absolver, another local act, this one crossing over into the demented headspace that results in mixing doom with death/experimental and even avant-garde influences.

Behind Windhand’s appearance on January 27th at Las Rosas is the team of Heroes Live Entertainment, a local promoting company devoted to bringing quality music to the South Florida area. Las Rosas is a venue that just last summer celebrated their first anniversary as a live music joint, and yet has quickly become a staple host of more and more local as well as touring bands. In addition, the numerous recurring events they have become home to, also cement its importance in the scene, such as Love Below, Gender Blender, and Words and Wine. They’ve certainly found their footing as more than just your local dive bar.

The show is free (as are all shows at Las Rosas), luckily enough for us, though I’m sure we’re all happy to contribute a few bucks of beer money to a touring act, right? Las Rosas isn’t exactly a huge venue, though, and a band like Windhand might bring a big crowd, so it may be wise to RSVP right away and show up early. Miami time doesn’t always work in your favor.

In the meantime, let’s crank some WINDHAND!!

Check out other amazing shows being brought down by Heroes Live Ent!! 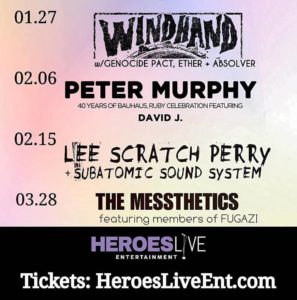