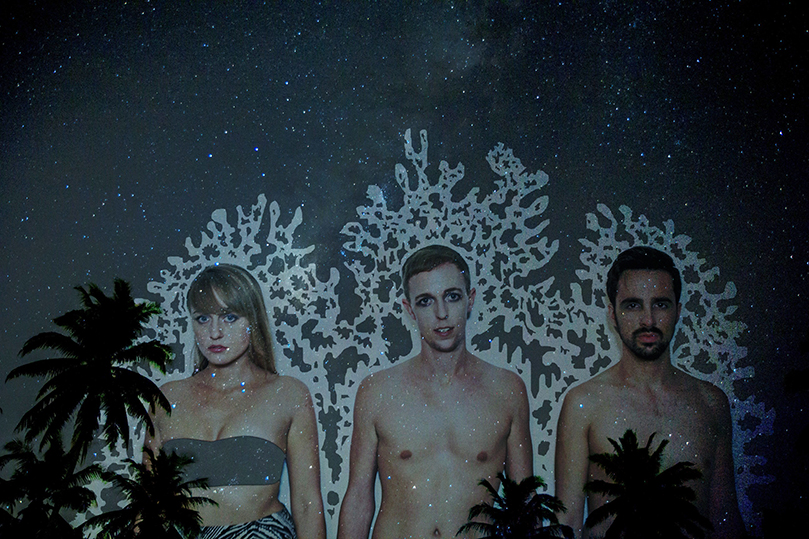 A Conversation with Bluejay

Interview by By Sarah Moody

Bluejay is so sweet, like candy rainforests of sound, melodies familiar yet fresh. We have the pleasure to experience this band mature, Miami, and my, please do not miss out on them.

Bluejay is a three-piece band comprised of siblings Jay Thomas + JoJo Sunshine with Oscar Quesada. Each member adds great ingredients to their unique sound, garnering memories of childhood, folklore, yet makes you move, swag, and long to sing along… they’ll have you singing with them by the end of their set!

We got a chance to ask Jay a few questions as we wait to see them at their next big show at the Virginia Key Grassroots Festival, Saturday February 20th at 5pm on the Zen Village Stage.

Your live show has grown a lot. Where is your music at right now?

A significant development which has broadened our range has been incorporating JoJo’s songs into our live show. We like to traverse many feelings throughout our show, and we’re working on capturing that with our new record.

What led to this evolution of your sound?

There was a shift when we moved the band from Tallahassee to our hometown, Miami. Our aesthetic inspirations shifted from forest fairies and keg parties to chilling by the bay and high-speed nightlife.

With JoJo’s songs becoming more of a presence, there’s a lot of new space to explore, as Bluejay becomes the experience of two narrators instead of one.

Who were you inspired by when you started the band and who is influencing you now?

The three of us each have a musical and artistic palette we draw from. Now, it’s mostly about influencing each other! Bluejay is less about Genre and more about Approach. We lean towards the genre of what the essence of the song desires.

How does the Miami scene add to your music and your band culture?

So many of us in the Miami scene are working on our craft. Photographers, painters, drag queens, fellow musicians… Even if we’re working in different mediums, we’re all talking about our next big ideas. Miami feels like a brotherhood rather than a competition.

If you could collaborate with anyone, who would it be?

We would like to work with a Video Animator, to enhance the surreal aspect of our music. There is a ceilinglessness to animation.

Who would you like to see in your audience?

Our shows are a space for anyone wanting to party or cry or both.

What do you want to make music about, but don’t?

JoJo and I have volumes of horrors yet to share.

What is the new record about?

The album we’re working on now is more Miami flavored than the records we made while working from Tallahassee. We’re hammering away at it, making sure we deliver a start-to-finish album experience like a mixtape for a road-trip.

Excited for the festival atmosphere (on the beach!) at Virginia Key Grassroots Fest on February 20th!